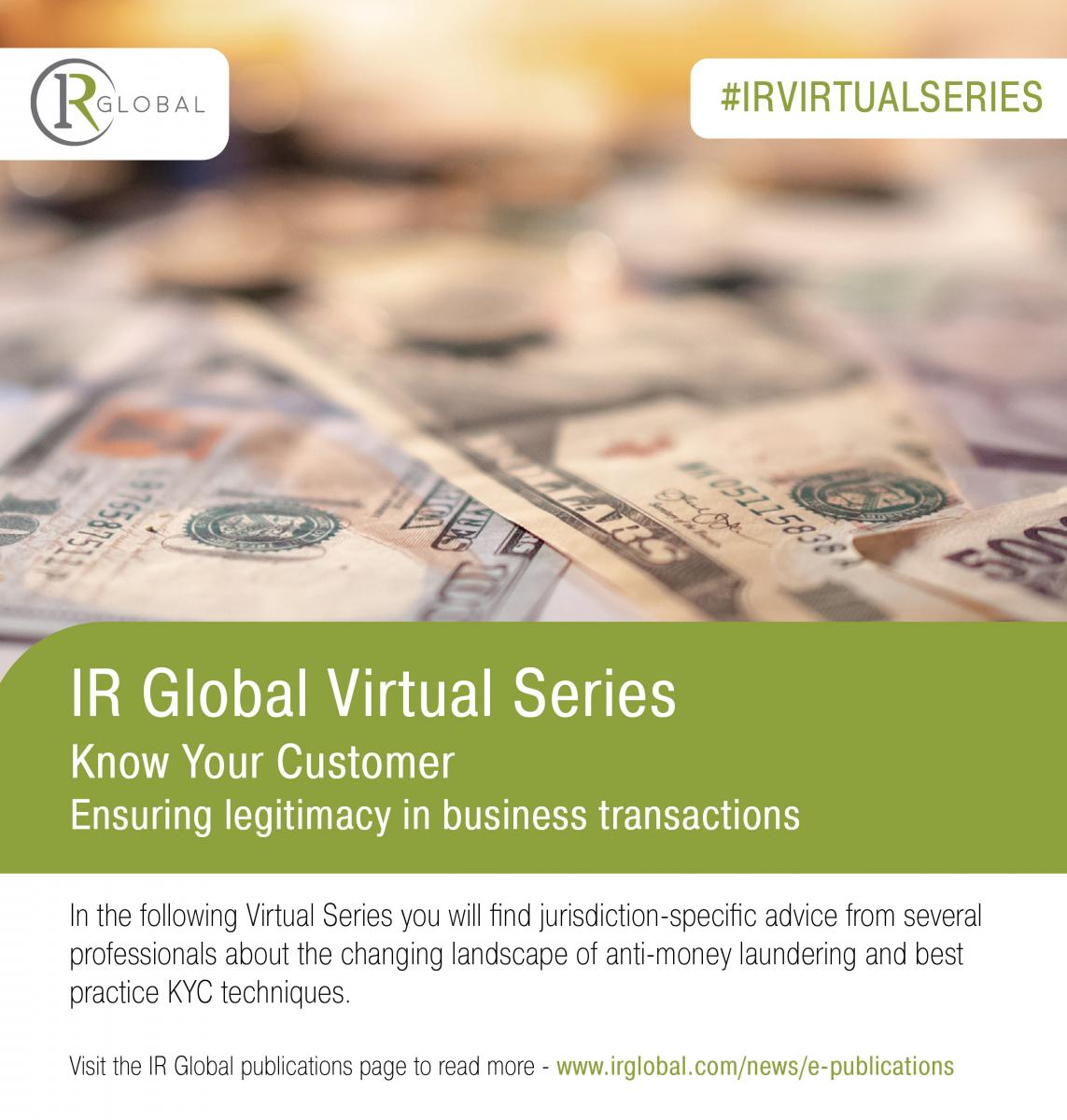 KNOW YOUR CUSTOMER: Ensuring legitimacy in business transactions - An Overview from the IR Global Network

The past decade has seen a marked increase in effort from the international community to combat money laundering. As new opportu­nities to launder money have arisen, aided by technology and globalisation, new regulations have sought to keep pace with these develop­ments and counter the threat.

Bodies such as the Organisation for Cooper­ation and Development (OECD), the G-7 and the European Union (EU) have been at the fore­front of this fight. They have asked all jurisdic­tions under their auspices to adopt high stand­ards of accountancy and transparency when it comes to the assessment of financial transac­tions. The EU’s Moneyval institution holds all EU member states to account on anti-money laundering practices, while the G-7’s Financial Action Task Force (FATF) does a similar job with its members.

Alongside this supranational activity, we have also seen many jurisdictions revamp and tighten their own domestic legislation around money laundering. As the illegitimate funding of terrorism has increased the profile of money laundering, it has also trained a spotlight on those jurisdictions that haven’t taken it seriously enough (e.g. Panama Papers). This increased negative press has encouraged many coun­tries, particularly smaller international busi­ness centres, to improve their image. Malta, for example, has its own dedicated Financial Intelli­gence Analysis Unit and several laws dedicated solely to anti-money laundering.

All of this extra focus on the prevention of money laundering has thrown a lot of responsi­bility on third-party corporate service providers and other professionals, such as lawyers and accountants. The new legislation is designed to make everyone involved in money-laundering, even indirectly, culpable. There is an onus on clients to voluntarily divulge information such as the source of funds or beneficial ownership, but this shouldn’t be relied upon. The same is true of due diligence done by a third party outside your own business.

Know Your Customer (KYC) regulations can be onerous, but they must be complied with. This means understanding client businesses inti­mately, including any holding structures. It also means identifying beneficial owners, analysing business transactions and identifying financing and source of funds. Having the resolve to ques­tion a client’s motives and business practices is paramount, even if that means losing business.

Many jurisdictions are adopting a risk-based approach to KYC, allowing them to set parame­ters for the level of scrutiny that certain transac­tions require. Meeting these criteria is essential, but it is also advisable to set the bar higher, imagining a worst case scenario and planning for that. The advent of things like digital banking and cryptocurrencies has made it much harder to maintain transparency in any given transac­tion. Maintaining high levels of scrutiny, even for established clients, is less likely to mean that professionals offering corporate services have to risk their own reputations by facilitating money laundering.

The Virtual Round Table Series presents jurisdic­tion-specific advice from several professionals about the changing landscape of anti-money laundering. They will provide an update on the legislation in their jurisdiction, and offer tips on the best practice KYC techniques to use when seeking information on companies and individ­uals in their countries. They will also assess some common business scenarios, looking at which might be higher risk than others and which could require enhanced due diligence measures.

What are the international and country-specific regulations that clients must comply with, or account for, when seeking to do business in your jurisdiction?

Theodoros Kringou – Cyprus (TK) Cyprus is considered as one of the most attractive jurisdictions for investment across Europe for several reasons. It is not easy for new investors to receive approval however, because of the due diligence regulations and strict controls.

During the last decade Cyprus has been a target of many European countries, due to its perceived lack of money laundering regulations, however stricter compliance practices, introduced after the banking sector’s collapse in 2013, are changing that perception.

Similar to many European countries, Cyprus is subject to the regulations of the EU as well as the ones imposed by the local regulatory authorities. The fifth edition of the Directive on the Prevention of Money Laundering and Terrorist Financing was issued by the Central Bank of Cyprus which shows that supervised entities are obliged to comply with the law and adopt due diligence procedures to get to know all their clients, without exceptions, as well as to monitor the status of their clients.

In addition to the due diligence regulations of the AML directive, new controls were imposed relating to transactions incurred by shell or shelf companies. In particular, the Central Bank of Cyprus issued a circular to all regulated financial institutions, specifically focused on the way banks and other regulated entities must deal with such companies.

Although the stricter controls adversely impacted the attractiveness of the country as an investment destination, the aim of such controls is to prevent money laundering or counter-terrorism activities throughout the country, or through the use of any local financial institution.

What are the best practice KYC procedures that you would recommend when engaging in a new business transaction in your jurisdiction?

Cyprus – TK Customer due diligence and the implementation of a risk-based approach are definitely ways of mitigating any AML risk when engaging in new busi­ness dealings.

The financial sector makes up a major part of Cyprus’ economy, and so it is gener­ally acceptable that the need to implement effective KYC procedures is quite high for local enterprises. It is also important to note that, during the last decade, a significant part of the local financial institutions’ deal­ings related to foreign investors, making the investigation procedures even more crucial.

Following the approach of the local regu­latory authorities to make Cyprus as one of the safest investment destinations in Europe, the implementation of an appro­priate risk-based approach is definitely required by all regulated and non-regulated enterprises.

Whether an entity or a transaction is defined as high or low risk, the risk-based approach of local enterprises takes into consideration – amongst other things - the assessment of each entity involved in any business dealing. This includes the coun­tries and industries involved, identification of the beneficial owner and source of funds or source of wealth, the nature and purpose of each transaction, as well as the involve­ment of any politically-exposed persons or state-owned entities.

Under what scenarios do clients need to follow a strict KYC process in your experience – when are they most at risk?

Cyprus – TK As per the AML Directive, all regulated entities must implement a risk-based approach stating clearly the risks involved and the necessary processes that should be followed at each time.

In the case of high-risk transactions, such controls become stricter and the involve­ment of experts is deemed necessary. Examples of high-risk entities (being either physical or legal) are the involvement of politically-exposed persons or entities from sanctioned jurisdictions. Hence, stricter controls must be followed so that the acceptance of such cases is always in line with AML/KYC regulations.

With regard to Cyprus, the increased interest from foreign investors and the new generation of technological development, particularly in the financial sector, led the local authorities to revise all due diligence and KYC regulations. The use of digital currencies in the banking and business sectors is considered high-risk, making the respective sectors highly regulated.

The involvement of intermediary compa­nies in supply chain management is another example of a high-risk transac­tion, due to the complexities involved. Such cases have significantly increased during the last decade, leading to a corre­sponding rise in the registration and use of local shell companies.

To restrict the use of shell companies and enhance transparency, the Central Bank of Cyprus has recently issued a revised circular on the definition, use and substance of shell entities. This includes the identity of the beneficial owner, the source of funds and the transactional behaviour of such enterprises.

Cyprus is currently in the process of devel­oping a public register with information on ultimate beneficial owners, accessible to legal entities solely for the purpose of due diligence and customer identification. The public register will be maintained by the Cyprus Registrar of Companies and Offi­cial Receiver.

Access the full publication here), including views from professionals in the jurisdictions of U.S - California, Dutch Caribbean, China and Malta.